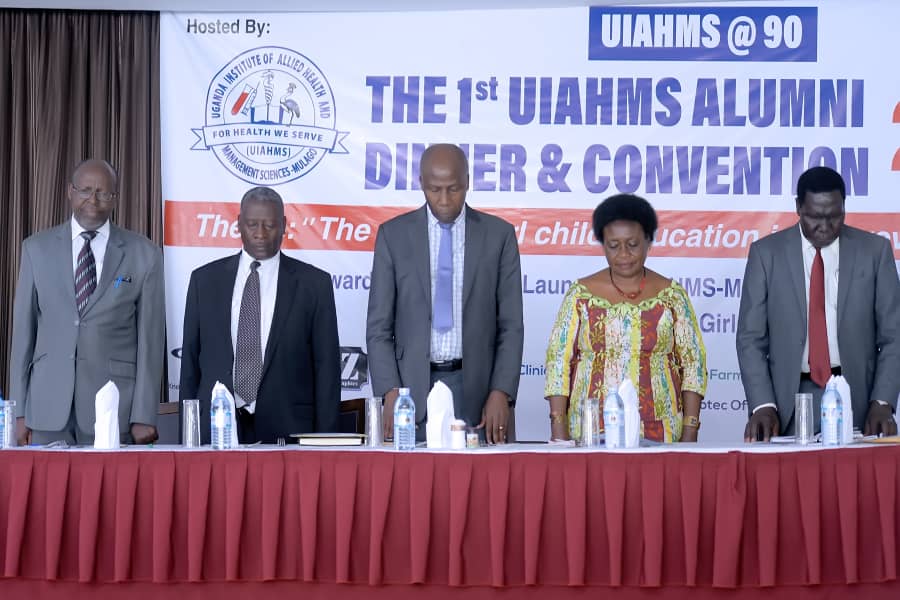 It is exactly 90 years since 1929 when Mulago Paramedical was established in Mulago Hospital and I wish to extend our heartfelt gratitude to all those that supported and attended the first UIAHMS Alumni Convention at Imperial Royale Hotel on the 05th of July 2019. We say, Thank you so Much.
As I am writing this message, I can’t help but reflect on the school’s past whilst also wondering what UIAHMS will be like 10 years from now when the school turns 100.
It is by no doubt that the Uganda Institute of Allied Health And Management Sciences, UIAHMS (formerly Mulago Paramedical Training Schools) has over the years evolved into the largest Health training Institution in the country with 21 Health Programmes and a capacity ranging between 1500 and 2000 students per Academic year.
UIAHMS holds a special place in the hearts of some of us because it drastically shaped our lives. It is therefore not a surprise that we pride in this institute but usually, protecting and preserving this kind of well-deserved pride can only be possible through unity and hard work to fix what still holds the institute back.
Research and scholarly postings often make institutions attractive destinations for competitive research grants and collaborations but this is one area that has been COMPLETELY ignored on top of other flaws that need urgent check if we are to sustain and / or better our position as the leading tertiary health training institute in Uganda.
Indeed, with due credit to those who give their best to keep UIAHMS on top and fairly visible, I have never stopped thinking about the massive missed opportunities that can come with the effective mobilization of more than 24,000 alumni from 1929 to date.
First, we all know that since Mulago Paramedical opened its doors in 1929, its mission has been that of developing and empowering health professionals. With this, it has contributed to the health, as well as the social and economic development of Uganda, Africa and beyond directly or indirectly.
UIAHMS has nurtured many graduates who have been involved in the management of global affairs not only as health professionals but also as leaders and managers of many influential institutions in Uganda and world all over.
On the backdrop of the above and reminded of the institute’s current situation of limited resources (finances, infrastructure etc.,) which in all ways affects the academic performance, I begin to relate it with Yale University’s financial troubles of early 1900s and the immediate actions of its alumni.
Yale University is one example of leading universities whose alumni did not allow their universities to be run down by funding-instigated troubles by uniting to their aid.
In 1918s, in The Cornell Daily Sun, the chairman of Yale Alumni Association appealed to the alumni to come to the aid of the university and save it from its financial embarrassment.
Yale University then was faced with an abnormally large deficit that made it nearly impossible to offer competitive education and at the same time compete in research and innovation from which it derived its prestige.
The limited resources are slowly eating into the institute’s competitiveness and if unchecked, it will finally undermine its ability to attract and retain qualified tutors, bring to complete halt the expansion and continuous updating of teaching and administrative infrastructure and disable its management functions.
On the other hand, the institute needs a sustainable source of income, specifically aimed at building a research and innovation fund that can aid the building of a knowledge economy to the pride and sustained influence of its alumni.
With the Yale University example, it is now apparent that alumni associations all over the world have aided their institutions to continue shinning in research and innovation. They do so through generous bequeathing of cash and non-cash gifts to their universities on an annual basis. They in turn receive recognition, influence policy and service delivery through their direct and indirect support.
The current difficulties at UIAHMS (because indeed they exist) have also partly led to the mistrust between the public, the alumni and the institute they truly love. This is due to the fact that many UIAHMS students and staff usually leave its gates tired and exhausted due to poor academic and administrative services. Very often, many among us have blamed government, the institute management or even failures of academic staff for this.
On our side as alumni of the institute, we have undermined our role and instead opted to silently look on with pity. I believe it is time for us to remind ourselves that this is an institute that has made us who we are and that we have influence to guide and restore its vibrancy again through the UIAHMS Convocation.
Often, I have also heard people arguing that this is a government institute and, therefore, government should take care of all its financial needs.
Indeed, UIAHMS is owned by government but as alumni and as in the case of Yale University in early 1900s, we desire an Institute that can keep us proud and sustain the integrity of our qualification. It is also true that the institute’s current “resource strains” are a threat to the historical pride that we often enjoy and this is slowly fading away.
Let us start working together to inculcate in all of us the culture of generous giving back to UIAHMS (Mulago Paramedical.) We should promise never to say goodbye.